Hemp banking regulations loosened. Although hemp products contain much less tetrahydrocannabinol (THC) and cannot be made into drugs, federal law previously considered it to be as forbidden as heroin or cocaine. Last year, Congress legalized hemp as a crop and the Department of Agriculture started to regulate its production. Earlier this month, federal and state regulators announced that banks will no longer need to treat their hemp customers as suspicious, eliminating the need for the filing of voluminous paperwork to anti-laundering authorities for each transaction. Banks can now treat hemp producers like other customers so long as the companies follow the licensing requirements. Time will tell if the ease on reporting is enough to make banks feel comfortable in the hemp space.

While the change will help businesses making hemp products, it does not affect the legal marijuana businesses dealing with similar issues. The federal government still considers marijuana to be illegal, and for the most part, even local banks have been too worried about getting in trouble to deal with them.

However, banks have come together to support a bill in Congress, the SAFE Banking Act, that would legalize marijuana banking by stipulating that the proceeds of a state-sanctioned marijuana business would not be considered illegal under federal anti-money-laundering laws.

The House of Representatives passed a version of the bill, and the banking industry is pushing the Senate to pass the bill. If it were to become law, it would allow banks to get involved in the industry, providing loans, checking and savings accounts and credit card processing.

Last November, the Federal Deposit Insurance Corp., the Office of the Comptroller of the Currency, and the Board of Governors of the Federal Reserve released a proposal to increase the appraisal requirement from $250,000 to $400,000.

After nearly a year of deliberation, the agencies all approved the rule in September 2019, which was then published in the Federal Register in October, making it official.

The new rules do not apply to loans wholly or partially insured or guaranteed by or eligible for sale to, a government agency or government-sponsored agency. It will primarily affect loans that are held in portfolio by lenders or sold to secondary market investors by way of the private-label securitization market. In addition, the rule does not entirely exempt the relevant home sales from any type of appraisal-type action. According to the agencies, the final rule “requires institutions to obtain an evaluation to provide an estimate of the market value of real estate collateral”, which evaluation must be “consistent with safe and sound banking practices” and  “should contain sufficient information and analysis to support the regulated institution’s decision to engage in the transaction.”

Undoubtedly, the change will have a sizable impact on the real estate market, as according to regulators, the new rules apply to approximately 40% of home sales.

Instead of writing about legislative changes or case law, I thought the story below should be shared in its place this quarter.

SCAM ALERT! Someone else could own your home. The following story was in the Daily Herald, but this scam could have occurred anywhere and appear in any newspaper. According to the Herald, a 10-year homeowner, Rohina Husseini, discovered that hers was no longer her own when she looked at a piece of junk mail. Husseini had received multiple refinance offers in the mail over the summer and merely disposed of them without opening them. However, the one issue that bothered her was that the mail was addressed to another woman. Eventually, Husseini opened one.

“You bought a new house, congratulations,” read the letter addressed to Masooda Persia Hashimi. Hashimi had never lived in the house, nor did Husseini know of the woman. Husseini discovered the woman was now the legal owner of the brick Colonial worth about $525,000.

Husseini was the victim of a crime called house stealing or deed theft that has seen an increase in recent years. Scammers gain control of a deed to a home and then attempt to resell the property or take out a loan on it. Husseini is now attempting to regain legal ownership and control of her home via the filing of a lawsuit.

According to the lawsuit, Husseini’s ordeal began in May. Husseini’s ex-boyfriend, Edres Hamid, walked into a Fairfax City law firm and passed himself off as Husseini. Hamid told the attorney he was headed overseas as part of a military deployment and wanted to transfer control of his home to his wife, Masooda Persia Hashimi, who was with him at the law firm. The lawsuit says the attorney failed to check their identities, before transferring the title to Hashimi.

Husseini took her case to the Fairfax County police in August. After an investigation, Hamid was charged in a warrant with forging a deed and passing off a fraudulent record to the land records office in Husseini’s case. Unfortunately, Fairfax County police are unable to locate Hamid and Hashimi. Husseini hopes to persuade a Fairfax County judge to return her deed by the end of the year.

Fraudsters have long been scamming homeowners into turning over ownership of their homes through scam foreclosure help or forging deeds.  According to Cynthia Blair, president of the American Land Title Association, the scam is also popular in markets where homes are unoccupied or there are large numbers of vacation homes, because they make easier targets. Blair said the best safeguard against deed fraud is title insurance that protects against deed problems, while the head of the Fairfax County financial crimes squad recommended that homeowners remain vigilant.

Corporate Settlement Solutions has many Michigan branch offices to serve you—Traverse City, Suttons Bay, Elk Rapids, Charlevoix, Bellaire, and Mt. Pleasant, in addition to providing services throughout the eastern United States. CSS is one of the only title agencies to insure cannabis property transactions. If you have a real estate transaction that involves hemp or cannabis, please contact CSS to insure your transaction. 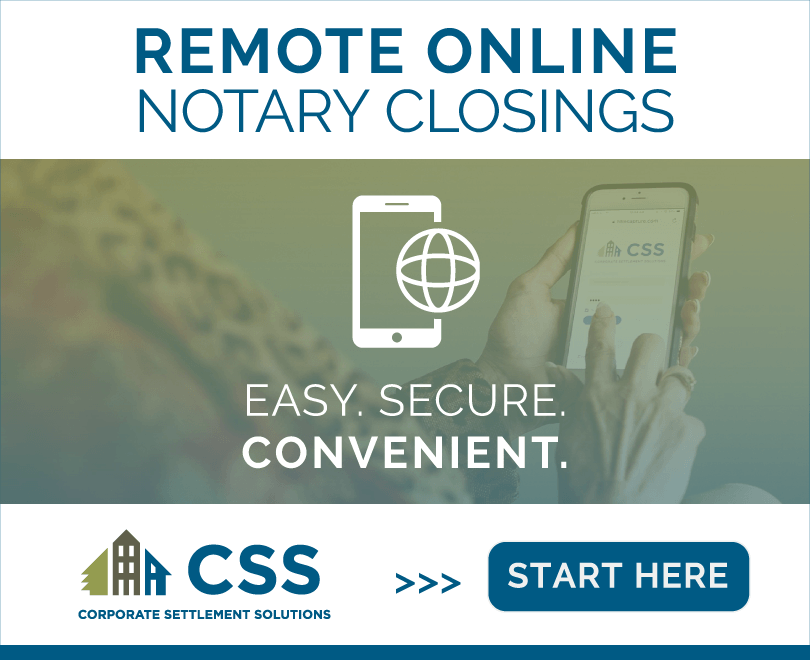 RON vs. RIN—What’s the Difference?

When the COVID-19 pandemic hit and stay-at-home orders were passed, businesses were scrambling to figure out how to proceed with their...

While regional lenders have historically narrowed working relationships to a few AMCs and home equity title, valuation & flood vendors, the...

Many real estate investors are familiar with the parameters and tax advantages of a Section 1031 tax-deferred exchange to defer the payment of...

Summer is FINALLY here, the temperatures are increasing, and so is real estate activity! A strong job market and low mortgage rates...

The Millennial Homebuyer is projected to dominate the housing market in the not too distant future. Sharing audience traits and characteristics...

The Advantage AVM Cascade solution ensures that the best possible AVMs are always in the lead positions of your cascades, guaranteeing the highest...

Electronic remote online notary (RON) closings are soon to become the new normal in Michigan. As a Realtor, if you haven’t been experimenting with...